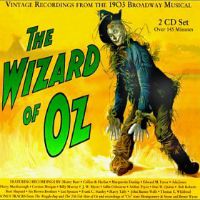 (3 / 5) Shortly after L. Frank Baum published The Wonderful Wizard of Oz, a stage musical version became the biggest hit on Broadway. Finally, a century after the show opened, a masterful CD anthology reconstituted it in audio form. Great credit is due to producer David Maxine, for whom this daunting project was obviously a labor of love: There were no cast recordings, the sheet music survived only in fragments, and the show never had a set score. Originally, Baum worked on the book and lyrics, and Paul Tietjens wrote some music for the show, but those rather halting efforts soon gave way to a never-ending batch of interpolated songs. (The name A. Baldwin Sloane, frequently cited as the composer of the show, is nowhere in evidence here.) As Maxine’s detailed notes make clear, The Wizard of Oz was topical and performer-driven, its material dropped in and removed incessantly. Among the more popular numbers were “Sammy,” “Hurrah for Baffin’s Bay,” and the cheerfully sadistic “Football.” If these titles don’t sound like they should be found on the road to Oz, the plot synopsis indicates just how little of the Baum book remained; even the Cowardly Lion was reduced to the status of a bit player. The two CDs of this set are crammed with all manner of curiosities. The bulk of them are acoustical studio recordings of the songs, but a few numbers exist solely as piano rolls or as music-box tunes. Also included are some non-Oz songs recorded by members of the original cast. Obviously, the “score” is a patchwork, and very little of it is better than mediocre, but it’s helpful that the lyrics are printed in the accompanying booklet. — Richard Barrios