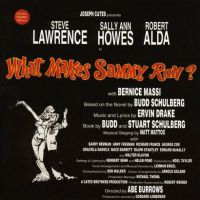 (1 / 5) Longtime theatergoers will recall that, for a brief time decades ago, Steve Lawrence was touted as the next great Broadway leading man. Exhibit A is this now-forgotten hit (540 performances), adapted by Budd Schulberg and his brother Stuart from the former’s scalding novel about Hollywood climbers. Lawrence is Sammy Glick, who rises from the position of copy boy for a New York newspaper to top Hollywood producer in record time, by any means needed. Sally Ann Howes plays a buttoned-up screenwriter with a yen for hustlers; she’s loved from afar by Robert Alda in the role of a fellow screenwriter and student of Glick. All three are fine, but they’re let down by composer-lyricist Ervin Drake’s score, which strains for ring-a-ding sophistication and doesn’t achieve it. Every number sounds like the opener of a Vegas floor show. Lawrence and Howes do well in “A Room Without Windows,” and Lawrence teams effectively with Bernice Massi, as a studio exec’s predatory daughter, in the appropriately titled “You’re No Good.” Don Walker’s generic orchestrations are no help; neither is the CD edition of the recording, released in mono by Lawrence. It was mediocre shows like this, with their derivative melodies and almost-clever lyrics, that helped bring down the curtain on Broadway’s golden age. — David Barbour