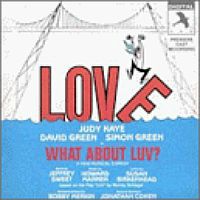 Studio Cast, 1990 (JAY) No stars; not recommended. The only reason to musicalize a play is to add something to it, to enrich the original material. But again and again in this show based on Murray Schisgal’s unique, distinctive, and uproarious 1964 comedy Luv, moments from the play are flattened out by what can only be called by-the-numbers musical theater writing. For instance, one famous scene in the play has two men comparing their miserable childhoods, each trying to prove that he had a tougher upbringing; simply putting the scene into song form robs it of most of its surprise, and about half of the original material is missing entirely. In another scene in Luv, the wife of one of the men comes on with a graph illustrating their lack of a sex life, and the no-nonsense tone of her speech is immensely funny; but composer Howard Marren and lyricist Susan Birkenhead have set the sequence as a jazz waltz, which is not only emotionally inappropriate but also makes it very difficult to understand the words. The plot point is covered, but it’s not the least bit funny anymore. Throughout, the thoroughly conventional songs sentimentalize the characters in a complete betrayal of the loopy original material. The cast of this recording includes Judy Kaye (who starred in the original Off-Broadway production) along with her husband David Green and the unrelated Simon Green. — David Wolf