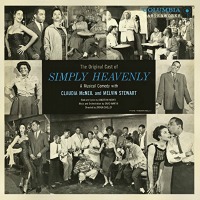 (3 / 5) Strong reviews kept Simply Heavenly on the boards for about four months in all. The show opened Off-Broadway, later moved to Broadway for a while, then went back to Off-Broadway in a different venue and finished its run there. Sometime in the middle of all that, this album was recorded. The show was also telecast by WNET-Channel 13 for five consecutive evenings in 1959 as part of the station’s “Play of the Week” series. Langston Hughes fashioned the book and lyrics from “Simple Takes a Wife” and other stories he wrote about the life of the character Jess Simple in Harlem of the 1950s. The evocative music is by David Martin, and the jazzy arrangements make good use of electric guitars and throbbing trumpets. Melvin Stewart, who plays Simple, is not the greatest singer, but he’s effective in his three monologues included on the recording. Vocal honors go to Claudia McNeil, who sashays through her 11-o’clock number, “I’m a Good Old Girl,” with humor and style. Partnered by John Bouie, McNeil also rips into “Did You Ever Hear the Blues?” and “When I’m in a Quiet Mood.” Other pleasures include the sweet title song, sung by Marilyn Berry; “Let Me Take You for a Ride,” an amusing duet for Simple and Anna English; and Brownie McGhee’s artful interpretation of “Broken Strings.” — Jeffrey Dunn