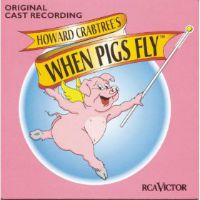 (2 / 5) The second of two revues that showcased the talents of outré costume designer Howard Crabtree was an evening of bright, largely gay humor. Though several of the songs by composer Dick Gallagher and lyricist-librettist Mark Waldrop are fun, the show’s real strength was visual, matching sketches to outrageously elaborate costume designs. A number called “Light in the Loafers” loses something when you don’t see dancers wearing electrified shoes; so does “Not All Man,” which was delivered onstage by David Pevsner done up as a centaur. A sketch featuring Stanley Bojarski as Carol Ann Knippel, the doyenne of a Midwest community theater, doesn’t slay on the recording the way it did live. Still, there are pleasures to be found here — many of them courtesy of Jay Rogers, who delivers a series of torch songs aimed at the right-wing ideologues Newt Gingrich, Strom Thurmond, and Rush Limbaugh. Rogers also gets the show’s best number: the touching, ruminative “Laughing Matters,” which only gains in poignancy when one knows that Crabtree died of AIDS shortly after this show opened. — David Barbour