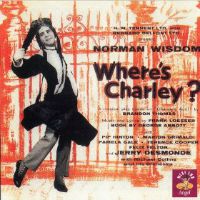 (4 / 5) Based on Charley’s Aunt, the reliable old farce by Brandon Thomas, Where’s Charley? was a big hit on Broadway in 1948 with Ray Bolger in the lead. But the show didn’t yield an original cast album, apparently due to a musicians’ strike; nor has there ever been a commercially released soundtrack album drawn from the obscure 1952 film version, in which Bolger recreated his stage role of Charley Wykeham. Fortunately, the 1958 London production yielded a good recording of the delightful score by composer-lyricist Frank Loesser. British stage and film comedian Norman Wisdom may not have had quite the same type of high-wattage comic energy that Bolger possessed, but he was much better suited to the part of Charley in terms of accent and singing ability, and his performance here is ingratiating. The supporting cast is generally fine: Pip Hinton is adorable as Amy Spettigue, while Pamela Gale and Marion Grimaldi sing beautifully as (respectively) Kitty Verdun and Donna Lucia d’Alvadorez. Felix Felton is very funny as Mr. Spettigue, who has no idea that Charley’s aunt — the woman he’s wooing for her money — is actually Charley in drag. The one inadequate performance on the album comes from Terence Cooper, who exhibits an unattractive, throaty singing voice as Jack Chesney. “Once in Love With Amy” is the show’s big hit, but the score is chockablock with skillfully crafted charm songs and comedy numbers (“Better Get Out of Here,” “The Woman in His Room”) and beautiful love ballads (“My Darling, My Darling,” “Lovelier Than Ever,” “At the Red Rose Cotillion”). Disappointingly, only a fragment of the title song is included on this recording; a lengthy ensemble number as written, it’s here reduced to one brief chorus introduced by Wisdom’s quotation of the show’s most famous line of dialogue: “I am Charley’s aunt from Brazil — where the nuts come from!” The album would be essential if only because it’s the sole recording of a fine Loesser score, so it’s good news that the performance is so praiseworthy overall, and that the early stereo sound is excellent. — Michael Portantiere