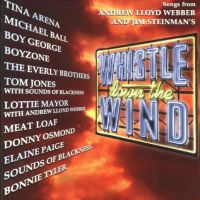 (2 / 5) Labeled Songs from Whistle Down the Wind, this collection of 12 numbers performed by a lineup of pop stars is easier to take than the subsequent London stage cast recording of this Andrew Lloyd Webber score. Divorced from the show’s ludicrous story line (detailed below) and arranged as the disposable pop artifacts they really are, the songs actually provide some enjoyment. Tom Jones, aided by Sounds of Blackness, offers a soulful “Vaults of Heaven.” The boy band Boyzone does right by the repetitive “No Matter What,” and Donny Osmond proves to be the ideal interpreter of “When Children Rule the World.” Also on hand are Elaine Paige, Meat Loaf, Boy George, Bonnie Tyler, and Michael Ball. It’s a relatively painless way to enjoy the modest pleasures of a misbegotten show. — David Barbour 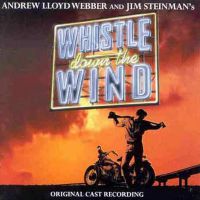 (1 / 5) This egregious Andrew Lloyd Webber musical, based on a novel by Mary Hayley Bell and a subsequent screenplay by Keith Waterhouse and Willis Hall, is about a group of poor children in rural England who mistake an escaped murderer for Jesus Christ. Told with restraint, it could have been a moving tale. Unfortunately, a committee of librettists — Patricia Knopf, director Gale Edwards, and Lloyd Webber himself — made the disastrous decision to reset the action in the American South during the 1950s. The show begins with one of the composer’s finest songs, the gospel tune “Vaults of Heaven,” but the score quickly turns into an unpalatable mixture of sticky sentiment and violent melodrama. Catchy tunes are often laughably unsuited to the onstage action, and matters aren’t helped by Jim Steinman’s clunky lyrics. The songwriters’ try-anything approach includes a pair of faux Brecht-Weill items, “Annie Christmas” and “Charlie Christmas,” plus the unbearably cute “When Children Rule the World” and the ridiculous “A Kiss Is a Terrible Thing to Waste.” The nadir is “Tire Tracks and Broken Hearts,” which recycles the melody of “English Girls” from Lloyd Webber’s Song & Dance. As the simple young waif Swallow and the escaped convict whom she believes is her Savior, Dottie Mayor and Marcus Lovett provide plenty of vocal emoting, but the songs are further sabotaged by the vulgar orchestrations of David Cullen and the composer. — D.B.