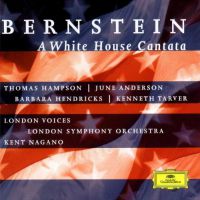 (1 / 5) The recording of a previously unrecorded musical theater score is usually a cause for celebration, but A White House Cantata is a maddening misfire. The 1976 Broadway flop 1600 Pennsylvania Avenue deserves better than this, not least because its score was written by luminaries Leonard Bernstein and Alan Jay Lerner. Many of their compositions for the show, which concerns race relations in 19th-century America, are of epic sweep, but in this cantata drawn from the score of the musical, they’re hurt by the style of presentation. From a purely vocal standpoint, the cast is fine: Thomas Hampson and June Anderson sumptuously sing the music of all of the presidents and first ladies, while Barbara Hendricks and Kenneth Tarver are more than capable as their black servants. But the renditions of most of the songs are overwrought and lacking in character and color; this is especially evident in “Duet for One,” in which two first ladies duke it out in song. The choral numbers are rich and full, the orchestra (conducted by Kent Nagano) is beyond reproach, and a good amount of material that was lost during the show’s tumultuous preview period has been restored. A White House Cantata is not a total loss, but the lack of theatrical verve makes this recording a poor representation of 1600 Pennsylvania Avenue as a theater piece. — Matthew Murray