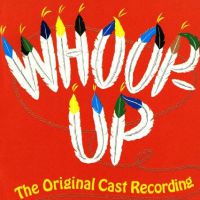 (2 / 5) With music by Moose Charlap and lyrics by Norman Gimbel, Whoop-Up was a quick failure set in a Montana bar (“where you don’t have to wear a tie to tie one on,” goes one of the forced lyrics). You’ll shake your head in amazement at such songs as “Nobody Throw That Bull,” “‘Caress Me, Possess Me’ Perfume,” “The Best of What This Country’s Got (Was Taken From the Indians),” “I Wash My Hands,” and “Montana,” which will never become that state’s official song. Susan Johnson has the strangest piece of material: “Men,” in which she speak-sings nearly three minutes’ worth of complaints about the male gender as a Dixieland melody plays underneath. The love songs, including the saccharine “Never Before,” are no better. Particularly bizarre is “Love Eyes,” sung by Ralph Young. (Sample lyric: “Your lipstick’s wet and waitin’ for my smear.”) That there were cover versions of some of these songs would be hard to believe if the  CD reissue hadn’t included quite a few of them. Jazz pianist Dick Hyman’s two cuts are bewitching; they prove that composer Charlap did come up with some fetching melodies for this score. — Peter Filichia