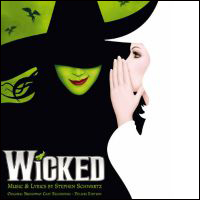 (4 / 5) Don’t go to this recording for a perfectly accurate representation of what’s heard in the theater; the songs were somewhat edited for the cast album to remove any hint of the twisty plot of Wicked, a musical based on Gregory Maguire’s novel, which purports to tell the true story of the “good” and “bad” witches immortalized in L. Frank Baum’s The Wizard of Oz. Still, this is one of Stephen Schwartz’s best scores — an unpopular opinion, admittedly! — and the excellent album boasts more than an hour of knockout songs, terrific high belting courtesy of stars Idina Menzel (Elphaba) and Kristin Chenoweth (Galinda/Glinda), and a fantastic-sounding orchestra conducted by Stephen Oremus. Listen particularly to Menzel’s astounding performances of “The Wizard and I,” “I’m Not That Girl,” “No Good Deed,” “Defying Gravity,” and her two gorgeous duets, “As Long as You’re Mine” (with Norbert Leo Butz as Fiyero) and “For Good” (with Chenoweth). Also pay special attention to William David Brohn’s great orchestrations in a pop-rock idiom that’s unusual for him. Unfortunately, very little of Winnie Holtzman’s adept libretto is included on the disc; the absence of dialogue leaves the estimable supporting performers Carole Shelley, Joel Grey, Christopher Fitzgerald, and Michelle Federer in the lurch. — Seth Christenfeld