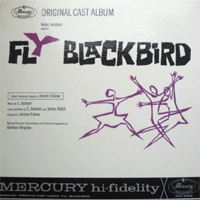 (2 / 5) The cast album of this virtually forgotten musical is especially notable for two of its principal cast members: Avon Long, whose lengthy and distinguished career included stage performances and recordings of the role of Sportin’ Life in Porgy and Bess; and Robert Guillaume, whose Broadway appearances in Kwamina, Purlie, and the 1976 production of Guys and Dolls preceded his fame as the star of TV’s Benson. Written By C. Jackson and James Hatch,  Fly Blackbird concerns the struggle for civil rights in America as seen from the differing points of view of an older black man and members of a younger generation. Long’s character counsels patience in achieving racial equality and eliminating discrimination, while his daughter (Mary Louise), her boyfriend (Guillaume), and the other young people advocate a more aggressive stance. The song titles — “Everything Comes to Those Who Wait,” “Now,” “Wake Up,” etc. — pretty much tell the story. Jackson’s lyrics are often pedestrian but sincere, and they’re set to some attractive if not especially memorable melodies by Hatch. — Michael Portantiere