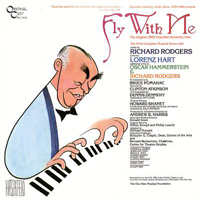 (3 / 5) It’s like dredging up riches from the Titanic: An unknown Rodgers and Hart score, their Columbia University varsity show from 1920, delivered intact. And the 17-year-old Richard Rodgers and 25-year-old Lorenz Hart are already their inimitable selves. Here’s Rodgers’ famous “wrong note” trick snuck into “Dreaming True,” thereby enhancing an already fine waltz. Here’s Hart rhyming extravagantly (“ecclesiastics,” “bombastics,” “iconoclastics,” “plastics,” and “gymnastics” in four bars of the opening number), moving the plot along, joking slyly (“Don’t love me like Salome / I’d hate to lose my head”), and going sentimental when the story calls for it. There’s also one lyric by Rodgers, and one by a young Columbia grad named Hammerstein. The score is so varied — waltzes, foxtrots, a Charleston, a rousing school song — and so frisky, it’s a marvel that it took Rodgers and Hart five more years to be noticed. Bruce Pomahac’s orchestrations, while not authentically of the period, are authentically Broadway; the socko overture alone justifies the album. But here’s the rub: This is a recording of a live performance at Columbia, and it’s clearly a varsity show with varsity talent. The undergrads seem like nice kids, but they hardly display trained voices or make the most of the material, although Avi Simon and Marci Pliskin get a nice rapport going in “Don’t Love Me Like Othello.” The silly book, set in the distant future (1970), peddles ethnic stereotypes, so you have to put up with Rod McLucas’s bad French accent, and with Peter Cromarty and Annie Laurita pretending to be Chinese (in “Peek in Pekin’). This is all forgivable. What hurts more is that many of Hart’s lyrics are unintelligible; the small-voiced performers are too far away from the microphones, and an appreciative audience sometimes drowns them out. Still, this album shouldn’t be passed up. Just settle down with a copy of The Complete Lyrics of Lorenz Hart, turn to the section that covers 1920, and prepare to be dazzled.  — Marc Miller