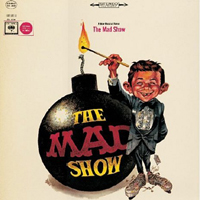 (4 / 5) Marshall Barer was an unsung genius lyricist of the musical theater; his output was slight in terms of quantity, but he could write a ballad or comic song with a felicity equal to anyone in the field. The Mad Show, a reunion with his Once Upon a Mattress collaborator Mary Rodgers, yielded one of the funniest recordings in cast album history. Of course, it helps if you’re tuned in to the anarchic (and New York Jewish) humor of Mad magazine. The excellence of the revue, the unity of its components, and its terrific cast all shine through on the recording. Here are Linda Lavin, JoAnne Worley, MacIntyre Dixon, Richard Libertini, and Paul Sand in the show that propelled their long, distinguished careers. A highlight of the album is a non-Barer song, “The Boy From,” which all good musical comedy queens (err, fans) know was credited to Rodgers and “Esteban Ria Nido” — a pseudonym for Stephen Sondheim. The Mad Show ran for almost nine hundred performances. Unfortunately, when the show was released for production by regional groups, it was in a bowdlerized version. To add insult to injury, the recording wasn’t issued on CD until 2005, when DRG happily remedied that situation.  — Ken Bloom