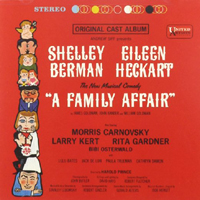 (1 / 5) This recording begins with the strains of “Here Comes the Bride,” then the first words we hear are “Will you marry me?” The story goes on to trace what happens between those words and “I do.” Noteworthy as composer John Kander’s first Broadway show (collaborating with James and William Goldman) and Harold Prince’s first Broadway directing credit, A Family Affair is about how the Siegels and Nathans of Chicago deal with their kids’ impending nuptials. Top-billed Shelley Berman as the bride’s uncle has a second-act number, “Revenge,” that incorporates the sort of telephone sketch for which this comic was well known at the time. Berman manages not to obscure the prettiness of “Beautiful” and, backed by the male chorus, he does well with the cliché-ridden “Right Girls.” With co-stars Eileen Heckart and Morris Carnovsky (as the groom’s parents), he puts over “I’m Worse Than Anybody.” Carnovsky, best known for his Shakespearean roles, is a game participant in “Kalua Bay” with Heckart, whose exuberance compensates for her vocal insufficiencies. (She’s very touching in “Summer Is Over.”) The vocal honors go to Larry Kert and Rita Gardner as the marriage-bound kids; they excel in their duets (“Anything for You” and “There’s a Room in My House,” the latter as fine a ballad as Kander ever wrote), and in the now politically incorrect “Every Girl Wants to Get Married” (Gardner) and “What I Say Goes” (Kerr). Bibi Osterwald runs riot as a wedding planner, leading her cohorts in the show-stopping “Harmony.” — Jeffrey Dunn