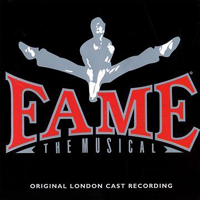 Original London Cast, 1995 (Polydor) No stars; not recommended. After achieving great success as a movie and a TV series, Fame landed with a thud when it hit the stage. All about students at New York City’s legendary High School for the Performing Arts, the source material seemed perfect for a musical. If only creators José Fernandez (book), Jacques Levy (lyrics), and Steve Margoshes (music) had had something more in mind than an after school special version of A Chorus Line. They use every cliché imaginable to tell of ambitious kids dealing with drugs, sex, and angst; no new dramatic or musical ideas are found here. Aside from the famous Dean Pitchford-Michael Gore title song, which found its way into the score, the music mostly consists of flavorless beats and vamps, while the lyrics say very little, very loudly. The song titles alone speak volumes: “Hard Work,” “I Want to Make Magic,” “Let’s Play a Love Scene,” and so on. Miquel Brown, as the teacher who wants to nurture the kids’ minds rather than their talents, performs the gospel-like “These Are My Children” with something akin to real emotion, though lyrics such as “These are my children / My saving grace / I see my calling in every face” don’t make it easy for her. At least she’s not in the position of Marcos D’Cruze, who’s saddled with one of the most embarrassing “comedy” songs of the 1990s: “Can’t Keep It Down.” As he sings, “You know what it’s like / When you wake up in the mornin’ and it’s hard / Standin’ up straight at attention / Like the changin’ of the guard?” — Matthew Murray 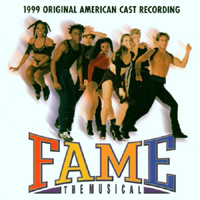 (1 / 5) Despite the inadequacies of Fame as a stage musical, the first American touring production did boast some top-notch talent. Gavin Creel, Jennifer Gambatese, Kim Cea, Nadine Isenegger, Robert Creighton, Clyde Alves, and Natasha Rennalls are among the cast members who went on to bigger and better things. They make the most of the material, and some credit goes to Jo Lynn Burks for her musical direction; this recording has more energy than the London cast album. But since it features the same insufferable songs, that makes little difference. Creel and Gambatese’s numbers come off well, and Rennalls is fine in the title track and in her falling-apart number, “In L.A.” As with the London cast recording, “These Are My Children” is a relative standout, here sung with heartfelt passion by Regina Le Vert. — M.M. 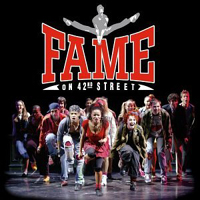 Original Off-Broadway Cast, 2003 (Q Records) No stars; not recommended. When Fame finally landed in New York, it played at the Little Shubert Theatre and was renamed Fame on 42nd Street — as if a title change would save it. But no time was spent fixing the show’s ridiculous lyrics and trite sentimentality. Unlike the other recordings, this one boasts no exceptional cast members. Cheryl Freeman tries hard but can’t make much of anything out of “These Are My Children,” though her duet with Nancy Hess in “The Teacher’s Argument” has an energy that previous renditions lack. Nicole Leach’s Carmen is decently sung but somewhat lifeless, as are most of the other performances. Two items of note: This disc includes music for a second-act pas de deux, and a “Romantic Suite” of songs from the show performed by the Budapest Symphony Orchestra. These tracks suggest that Fame might be a much better show if it were only danced and not sung. — M.M.