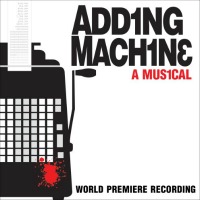 (3 / 5) You might think The Adding Machine, Elmer Rice’s 1923 expressionist drama, an unlikely candidate for musical adaptation. It’s a bleak tale of a bigoted, downtrodden bookkeeper who kills his boss and is executed, ending up in the Elysian Fields, where recycling doesn’t mean reusing plastic bottles. Thankfully, Joshua Schmidt (music and book) and Jason Loewith (book) took on the challenge, and this recording recreates most of the largely sung-through show in all its nerve-jangling dissonance. Joel Hatch is outstanding as the bookkeeper, Mr. Zero — so obnoxious that you know he deserves his fate, yet so thick, you understand how he got that way. Hatch conveys Zero’s character through the staccato snarls of Schmidt and Loewith’s lyrics, full of blunt, monosyllabic statements. The joys in Zero’s life are few, but he relishes them, whether it’s the “Ham and Eggs” his harridan wife (the marvelously caustic Cyrilla Baer) brings for his final meal, or recalling their few moments of wedded bliss in “Didn’t We?” But rage smolders within his confused mind, crowded with endless figures. When his boss crushes his fantasy of promotion (“Movin’ Up”), telling him that he’s being replaced by an adding machine, Zero stabs him. In the afterlife, Zero encounters two souls he knew while alive: his assistant, Daisy (Amy Warren), and fellow inmate Shrdlu (Joe Ferrell). Both get songs that break up the harsh score — a gooey love ditty for Daisy, and a gospel rouser for religious nut Shrdlu, detailing his mother’s murder and the hellish torments he expects for his crime. Most of the score is intentionally jarring; piano, synthesizer, and percussion bang into the brain while the repetitive chorus provides a counterpoint of chanted numbers and echoed lyrics. It’s exactly the right tone for Rice’s piece, though you probably won’t find yourself playing this one often because of the shrillness. — Laura Frankos