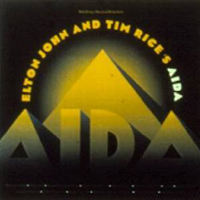 (2 / 5) Before the Broadway launch of Aida, composer Elton John recorded this studio set with a host of pop stars, including Sting, Tina Turner, Janet Jackson, Shania Twain, and James Taylor. The songs are out of their show order, and no synopsis is included; yet, oddly, this is a more entertaining disc than the Broadway cast album. That’s because, swathed in elaborate pop arrangements, the songs are advantageously displayed as the middle-of-the-road standards they really are. The stars are well showcased;  The Spice Girls, for example, lend some genuine oomph to “My Strongest Suit.” Elton John himself partners effectively with Heather Headley and Sherie Rene Scott in the trio “A Step Too Far,” and Headley solos on “Elaborate Lives.” Elton and Lulu also perform “The Messenger,” which is not to be found on the Broadway album. The set concludes with a bombastic “Orchestral Finale,” produced by Phil Ramone, that sounds like the perfect background music for an Olympic ice-skating competition.  — David Barbour 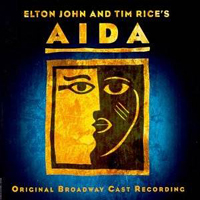 (1 / 5) The show’s a smash hit, so somebody must love it. On disc, however, shorn of spectacle and the leads’ good looks, Aida comes across as an extremely morose collection of Elton John power ballads. Amazingly, it took three writers — Linda Woolverton, Robert Falls (who also directed), and David Henry Hwang — to come up with the libretto, adapted from the classic opera. In their version, it’s a teen triangle with vague political overtones: Adam Pascal is Radames, captain of the Egyptian army, engaged to the air-headed clotheshorse Princess Amneris (Sherie Rene Scott). After subduing the nation of Nubia, Radames brings back the Princess Aida (Heather Headley), with whom he promptly falls in love. The three of them proceed to scream their heads off for two acts — lamenting cruel fate, etc., etc. There are a couple of catchy pop hooks in “The Gods Love Nubia” and “Written in the Stars,” but Tim Rice’s bone-headed lyrics drag everything down, as in the clunky “Elaborate Lives.” All three leads provide vocal thrills in abundance, especially Headley, whose intensely dramatic singing made her an instant star. Pascal does solid work throughout and Scott manages to keep her dignity even while performing the bizarre “My Strongest Suit,” in which Amneris exposes her extreme dedication to fashion.Still,this is one of the dullest entries in the pop-opera genre. –– D.B.