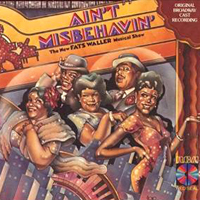 (4 / 5) Manhattan Theatre Club presented Ain’t Misbehavin’ to rave reviews before its hugely successful transfer to Broadway. What this show had that other composer songbook revues have lacked was tremendous theatricality, sparkling personality, and a cast of then-unknowns that rocked the theater: Nell Carter, Armelia McQueen, Ken Page, Andre De Shields, and Charlaine Woodard. These were not the pretty-but-bland sort of performers featured in revues that make one think of cruise ships and amusement parks. Under Richard Maltby, Jr.’s adroit direction, and thanks to unsung hero Murray Horowitz’s brilliant concept, this show featured performers of all shapes and sizes — and boy, could they sing, act, and sock Fats Waller’s songs into the rafters, with arranger extraordinaire Luther Henderson traversing the stage on a rolling piano. Ain’t Misbehavin’ was the first and arguably the last great songwriter revue to hit Broadway, and the recording beautifully captures the audio component of what was so very special about the experience.  — Ken Bloom