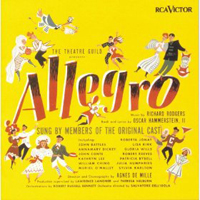 (3 / 5)
This recording presents only a small fraction of the score of Rodgers and Hammerstein’s third collaboration, a show that was both directed and choreographed by Agnes de Mille. The LP and CD editions were drawn from five 78-rpm records made shortly after the show’s 1947 premiere, so there’s less than 34 minutes’ worth of music here, with six songs and two dances excluded entirely. Granted, we’re not talking about a score that’s up to the level achieved by the masters in their previous two shows, Oklahoma! and Carousel. Still, this is accomplished work, even if the recording sounds antique. The story takes Joseph Taylor, Jr. from birth to middle age, so we witness the lad’s first steps (“One Foot, Other Foot”) and early courtship (the now sexist-sounding “A Fellow Needs a Girl” and the pulsating “You Are Never Away”). “Money Isn’t Everything” is a nifty waltz, and “The Gentleman Is a Dope” a stirring complaint, each displaying Oscar Hammerstein in a rare cynical mood. Richard Rodgers’ biggest missteps occur at the end of each act. First comes a wedding ceremony wherein the composer sets the famous vow “to have and to hold from this day forward” to a solemn melody instead of a joyous one that just might have become a standard at real-life nuptials. Similarly, at the end of the show, the music for “Come Home” (a command that Joe obeys) is so dreary that it seems to mark a defeat for the hero. The title song of the musical defines the term “allegro” as “brisk, lively, merry, and bright,” but those two numbers certainly don’t fit that description. — Peter Filichia 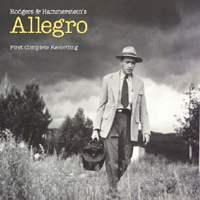 (5 / 5)  At last, after decades of waiting, the powers-that-be got on the ball and gave us a stem-to-stern Allegro so glorious that even R&H haters have to be impressed. The recording is almost three times more generous than the original, 100 heavenly minutes and 15 lovely seconds spanning two discs. And perhaps this should be described as a work by Rodgers and Hammerstein and Rittman, for the illustrious dance music arranger Trude Rittman offers 20-plus minutes of her brilliant work here.  Disc One promises quite a show right from the overture. You’ll hear a bit of a song you hadn’t heard on the original cast album, “A Darn Fine Campus, ” and that’s just the first hint of all the additional material: There’s more from the chorus on Joe’s birth and his time as an infant, a dance representing what Joe and his classmates did in nursery school, and a less joyous sequence after his beloved grandmother dies.  Collegiate Joe does seem to be happy to be in “A Darn Nice Campus” –- until he comes to the conclusion that he’s homesick. (“Poor Joe,” sings the chorus.) When Joe marries Jennie, we hear more of the wedding and his best friend Charlie’s feelings that he’d prefer to stay single.  Disc Two starts with an Entr’acte that reminds us of four pleasant songs we’ve already heard. There’s also the mindless-chatter song “Yatata,” which at least one etymologist has insisted was the precursor of today’s “Yada, yada, yada.” And the title song is augmented with much more music, as is the finale.  There are terrific performances from Patrick Wilson as Joseph Taylor, Jr.; Laura Benanti as the base-metal Jennie, who sounds as if she has enough acid in her veins to fill the batteries in a fleet of automobiles; Norbert Leo Butz as Joe’s best friend; Audra McDonald as Joe’s mom; and Maureen Brennan, Danny Burstein, Liz Callaway, and Judy Kuhn in other roles. Add to that Stephen Sondheim in a brief appearance during the finale.  (Yes, that Stephen Sondheim. He was, after all, there at 17 with the original production where, as he writes in the liner notes for this recording, he “typed scripts, got coffee, listened to Agnes de Mille maltreat singers, and watched this quite remarkable show come to life. I think I might not be so attracted to experimental musicals if I hadn’t wet my feet with Allegro.” ) While the original orchestra had 35 pieces, here esteemed conductor Larry Blank leads no fewer than 50, with nary a synthesizer among them.  Listening to the 1947 recording and then this one demonstrates how cast recordings have come — to quote one of Oscar Hammerstein’s lyrics from this show — so far. — P.F.