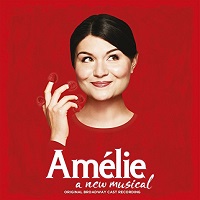 (1 / 5) The 2001 Jean-Pierre Jeunet film Amélie caused a major resurgence in American audiences’ interest in French cinema and at least briefly made a star of its leading lady, Audrey Tatou. Set in Paris, the film tells of an introvert who decides to do random acts of good deeds for her fellow Parisians while maintaining her distance so as not to actually get involved with the messiness of real life. The film is recalled by many as purely airy and whimsical, remembered largely for its fantastical imagery and Tatou’s impish charm. The stage musical follows the movie very closely in plot and structure, and has a very talented cast at its disposal. Unfortunately, writers Daniel Messé, Nathan Tyson, and Craig Lucas don’t seem to have realized that Amélie also deals with disappointment, grief, and loneliness, none of which comes across in the show or on this album. It doesn’t help that the score by Messé and Tyson aims more for a contemporary musical theater sound than for a classically French one. (There is no accordion to be heard in Bruce Coughlin’s orchestrations). Two of the least effective songs in the score are “Goodbye Amélie” and  “A Better Haircut,” which are meant to be comedic relief but instead come across as glaringly wrongheaded. Some of the other songs begin with fascinating, ethereal introductions that give hope for what’s to come, but then the songs themselves seem to evaporate, never delivering on the promise of the intros and the incidental music. In the title role, Phillipa Soo is surprisingly dry and often restrained by the score’s inability to properly showcase her mellifluous voice. She is, however, given strong support by a diverse cast that gives everything they can to add some spunk to the show. Sometimes they succeed, as in songs like “World’s Best Dad” or “Times Are Hard For Dreamers,” but these are small victories in an inoffensive yet undistinguished adaptation. — Matt Koplik