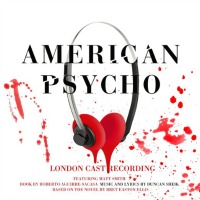 (4 / 5) Duncan Sheik’s score for this musical adaptation of Bret Easton Ellis’ savage (in all senses of the word), satiric novel marvelously captures the musical vibe of the go-go 1980s, when “greed was good.” It helps that interpolated into the show’s score are some of the decade’s big hits — for example, Tears for Fears’ “Everybody Wants to Rule the World,” Phil Collins’ “In the Air Tonight” — which have been terrifically re-conceived for a theatrical storytelling mode. What’s not always so successful is Sheik’s attempt to capture the book’s biting humor. In certain numbers (“You Are What You Wear,”) his work as lyricist zings,  communicating the characters’ sense of entitlement while also commenting on their vapidity. Other songs — like “Mistletoe Alert” which attempts a similar dual purpose — fall flat on this original London cast recording, without the visuals that audiences encountered in the theater. As a record of the musical, the album provides an intriguing glimpse of it “in process.” Before American Psycho transferred from London to Broadway, new numbers were written and the song order was changed; for those who saw the show during its brief run in New York, it’s fascinating to listen to this OLCR and hear how the narrative became more direct in the journey across the Atlantic. (Roberto Aguirre-Sacasa wrote the book for the musical.) In the unlikely event that a Broadway cast recording is ever released, it will probably overshadow this one, thanks to the changes and Benjamin Walker’s electrifying performance as Patrick Bateman. Until then, this album will have to suffice, and listeners will find that Sheik’s energetic melodies seem to demand repeated plays. — Andy Propst