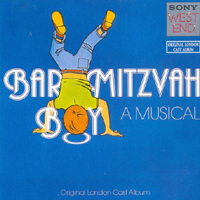 (3 / 5) The notes for the CD edition of this recording quote an ad from the theater program, predicting that “the show will be onstage a long time — the album will be on your turntable even longer.” But Bar Mitzvah Boy closed quickly in London. Jack Rosenthal based his book for the musical on his successful British teleplay about a London family planning a bar mitzvah; the title character, Eliot Green, disappears in the midst of the service. This little-known, under-appreciated show has music by Jule Styne and lyrics by Don Black. With Styne returning to his roots (he was Jewish and born in London), the score is one of the better efforts of his late career. Highlights include Eliot’s initial discussion with his rabbi about the meaning of a bar mitzvah, “Why?” / “If Only a Little Bit Sticks”; “The Bar Mitzvah of Eliot Green,” which deals with the tumult of preparing for the event; the parents’ love song, “We’ve Done All Right”;  Eliot’s sister’s ballad of reassurance, “You Wouldn’t Be You”; and “Rita’s Request,” a hilarious number for the mother. The score has a unique, Judeo/British, 1970s sound. It’s solid, impressive work even if it’s not in the same league as Styne’s Gypsy or Funny Girl. Directed by Martin Charnin, the strong cast includes many West End theater veterans. The hard-to-find recording is filled with nuggets of pleasure, and Eliot’s final, conciliatory song, “I’ve Just Begun,” is guaranteed to warm the heart of even the most jaded listener. — Jeffrey Dunn