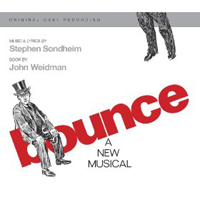 (2 / 5) Stephen Sondheim’s first new musical in nearly a decade, Bounce was highly anticipated when it played Chicago and Washington in 2003. Though this recording benefits from the lack of John Weidman’s book, the score doesn’t sound appreciably better here than it did onstage, despite a good orchestra conducted by David Caddick and a top-notch cast including Howard McGillin, Richard Kind, Michele Pawk, Gavin Creel, Herndon Lackey, and Jane Powell. What’s missing is a sense of vivid inspiration, although there are a few nice selections. The title song, sung by McGillin and Kind, is catchy; McGillin and Pawk have an attractive duet in “The Best Thing That Ever Has Happened”; and “Addison’s City” and “Boca Raton” make up an entertaining musical scene that chronicles the Florida land boom. Otherwise, the music has uncomfortable echoes of Sondheim’s superior work in such shows as Sweeney Todd(a vamp in the title song recalls “By the Sea”) and Merrily we Roll Along (Jonathan Tunick’s orchestrations could have been lifted from that show). There’s much here to appreciate, but little to love; Sondheim’s previous scores set the bar so high that a middling effort like this one just doesn’t seem quite good enough. [Ed. Note: Sondheim and Weidman later rewrote this show and retitled it Road Show; see separate review of the recording of that version.] — Matthew Murray