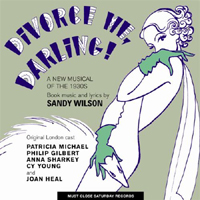 (4 / 5) If you saw The Boy Friend and wondered what happened to its characters 10 years later, Sandy Wilson answered that question with this delightful “1930s musical” sequel. It starts with the four “perfect young ladies” exclaiming, “Here We Are in Nice Again.” All the other characters eventually turn up in various disguises. Along the way, both stage and film musicals of the ’30s are affectionately spoofed with catchy pastiche songs. The original London cast is perfection, but it should be noted that Patricia Michael (playing Polly) was “indisposed” during the recording sessions; two of her numbers are sung by Jenny Wren, who does a fine job. The only original Boy Friend cast member in this show was Geoffrey Hibbert as Lord Brocklehurst, who delivers the hilarious “On the Loose.” Other highlights: the title song, performed by almost the entire cast; the mysterious Madame Kay (Joan Heal) in the sultry “Blondes for Danger”; Polly’s lament, “What Ever Happened to Love?”; Bobby’s sly seduction of Polly, “No Harm Done” (Cy Young); and the rhapsodic/comedic “Back Where We Started.” — Jeffrey Dunn 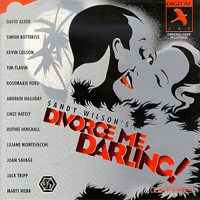 (3 / 5) Composer-lyricist Sandy Wilson writes in his notes for this recording that he was not happy with the original West End production of this show, but now, 32 years later, “I have seen Divorce Me, Darling come to life.” In the interim, Wilson had rewritten the book for a small production in 1979; that version is recorded here, and is now the standard performing edition. The recording features several musical theater stalwarts, among them Liliane Montevecchi as Mme. Dubonnet, Ruthie Henshall as Polly, Tim Flavin as Bobby, Linzi Hately as Hortense (the maid from the Villa Caprice, where the “perfect young ladies” were “finished”), Kevin Colson as Percival, and Marti Webb as Hannah-Bobby’s sister, a new character. The album has the same tune stack as the original London cast recording with the addition of “Back to Nature.” Many of the songs have revised lyrics, additional dance music, and lead-in dialogue. Wilson wrote an excellent 1930s pastiche score for Divorce Me, Darling, and this recording does it justice. If I have a slight preference for the previous recording, I wouldn’t want to be without either.  — J.D.