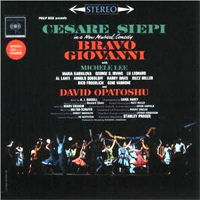 (3 / 5) This is a swell listen with a game cast, a lively Ronny Graham-Milton Schafer score, and the sort of floppola production numbers that are more fun than higher-reaching material in worthier musicals. A contrived tale of dueling restaurateurs in Rome, Bravo Giovanni also takes in a May-September romance (September didn’t look too bad in the person of Metropolitan Opera basso Cesare Siepi), a young Michele Lee belting “Steady, Steady” and other power ballads with intensity, and a manic Maria Karnilova flogging something called “The Kangaroo.” Siepi is strong and authoritative, especially in the winning “If I Were the Man,” and such sundry talents as George S. Irving and David Opatoshu work hard selling their substandard songs. There’s even a hit faux-Italiano ballad, “Ah! Camminare,” delivered by the reliable Broadway tenor Gene Varrone. The CD reissue has a bonus-track enticement: Lee in a rock-beat version of “Steady, Steady,” Like the show itself, it’s cheesy fun. — Marc Miller