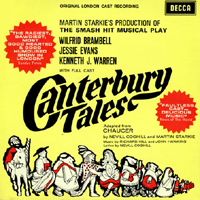 Original London Cast, 1968 (Decca) No stars; not recommended. After a long period during which London produced few musicals of consequence, things picked up in the ’60s. Some even called it the Golden Age of British musicals. One of the London hits of that period, perhaps because it was “racy,” was Canterbury Tales — a loud, tuneless bleat of a musical that ineptly adapted the Chaucer stories. Martin Starkie, working with Professor Neville Coghill’s translation of the tales, dramatized them just as two young composers, Richard Hill and John Hawkins, were writing a suite based on the work. When an LP called The Canterbury Pilgrims, narrated by Starkie, proved successful, a full musicalization evolved with book by Starkie and Coghill, lyrics by Coghill, and music by Hill and Hawkins — none of whom had ever written a musical. The disc reveals no characters and no sense of plot, just a series of short, formless pieces couched in a weird, ugly combination of medieval harmonies and trashy rock music. The songs announce themselves but don’t develop; for example, a number called “Darling, Let Me Teach You How to Kiss” just keeps repeating that phrase. This is the kind of show whose writers think using the word “cock” for “rooster” is pretty hot stuff — ergo the “joke” behind the song “I Have a Noble Cock.” — David Wolf 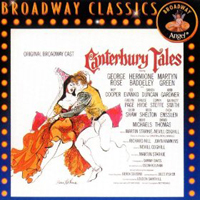 (1 / 5) It isn’t just chauvinism that makes me prefer this recording of the failed New York production of Canterbury Tales to the cast album of the successful British original, and it isn’t just stubbornness that makes me tell you it’s still not good. But it is much better. For one thing, the cast is superior, almost without exception. Sandy Duncan, Ed Evanko, Ed Steffe, Martyn Green, Hermione Baddeley, and George Rose perform the mostly dreary material as if it were My Fair Lady. Rose, who brought great style and humor to a number of unfortunate musicals (and revivals of some really good ones), performs a remarkable bit of alchemy with “If She Has Never Loved Before,” in a recording so different from the original that it almost sounds like a new song; here, it’s alive and even funny, a kind of joyous calypso number. Of course, that’s partly thanks to musical director Oscar Kosarin, who really knows how to drive this shaky score while managing to downplay the ugly rock noises heard on the London cast album. This remains a show about a group of English travelers passing the time by telling each other stories. One of the stories, “The Priest’s Tale,” was cut for the American production, along with five songs. Three new songs were added, and one of the originals — “What Do Women Most Desire?” — was totally rewritten as “What Do Women Want?” But the improvements are largely negligible.  — D.W.