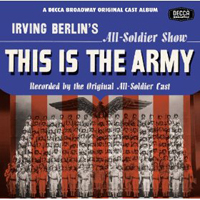 (4 / 5) The well-produced CD transfer of recordings made by members of the original cast of Call Me Mister, featuring a rediscovered, extended version of composer-lyricist Harold Rome’s aristocratic ballad “When We Meet Again,” proves that the show had more of an emotional arc than most revues. It starts thrillingly with a racially integrated chorus (rare in 1946), led by the excellent baritone Lawrence Winters, singing “Going Home Train.” The number is a multi-part rondo, a Rome specialty (“Did our share for liberty / Fought the guys who would destroy it / Now we’re goin’ back to enjoy it”), and an unusual instance of postwar patriotism that’s neither mawkish nor overbearing. The same happy-returning-G.I. motif resurfaces in the roof-raising title song (“Just call me Mister from now on”). But the score isn’t all flag-waving: “Military Life” presents the funny flip side of army conditioning. A moving tribute to F.D.R., “The Face on the Dime,” is sung by Winters, and the show had some rising-star power in the person of Betty Garrett, whose spirited rendition of “South America, Take It Away” swept the country. Also appealing are Garrett’s wistfully comic “Little Surplus Me” and confidently satirical “Yuletide, Park Avenue.” At 30 minutes in length, the Call Me Mister portion of this CD (which also includes selections from This Is the Army and Winged Victory) must be missing loads of material that was performed in the show itself. But what’s here, as they used to say, is cherce. — Marc Miller