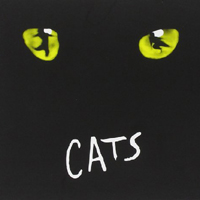 (4 / 5) Before it became a joke, Cats was a true phenomenon. While Trevor Nunn’s direction placed spectacle above emotion and story, the show has a better score than it’s usually given credit for. T. S. Eliot’s Old Possum’s Book of Practical Cats may not have been a natural choice for musicalization; still, Andrew Lloyd Webber found some remarkably creative ways to get Eliot’s feline characters to sing, whether in the style of straight-out pop (“The Rum Tum Tugger”), mock-operetta (“Growltiger’s Last Stand”), or a host of others. The magical (and highly electronic) overture, the rapidly shifting strains of the lengthy first-act Jellicle Ball, and the lush finale “The Ad-Dressing of Cats” all help to make this a musical theater score full of variety and invention. Even the now standard “Memory” works within the weird universe created by the half-posthumous collaboration of Eliot and Lloyd Webber. Here, that song is delivered beautifully by West End diva Elaine Paige as Grizabella, the Glamour Cat — the character who ties together the show’s story about junkyard strays meeting to decide which of them will be reborn into a new, presumably better life. Paul Nicholas’ Rum Tum Tugger, Brian Blessed’s Old Deuteronomy (and Bustopher Jones), and Kenn Wells’ Skimbleshanks also provide lots of fun. This recording of Cats captures the ineffably English tone of the piece, and is a highly entertaining listen. — Matthew Murray 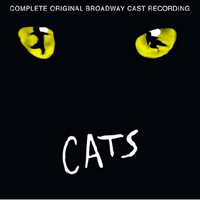 (4 / 5) One of the longest-running musicals in Broadway history, Cats is also the most inherently English of all the mega-musicals of its era, and so the unconvincing Brit accents and American vocal mannerisms of the original Broadway company do not lend this recording much authenticity. Still, with a cast this good, it barely matters. Betty Buckley is a worthy successor to Elaine Paige as Grizabella, and her “Memory” is one of the most powerful on record. (Many singers have recorded the song as a stand-alone piece.) Ken Page is particularly charming as Old Deuteronomy; future stars Terrence Mann and Harry Groener do very good work as the Rum Tum Tugger and Munkustrap; and Timothy Scott and Anna McNeely as Mr. Mistoffelees and Jennyanydots are delightful. Of special note is Stephen Hanan, whose hilarious Bustopher Jones, heartbreaking Gus, and dynamic Growltiger make him a standout. As is the case with the London album, this one is missing a certain amount of material, including some dance music and “The Awful Battle of the Pekes and the Pollicles.” But the superb cast and knockout orchestra, under the musical direction of Stanley Lebowsky, make it sound fresher and more vibrant than its predecessor.  — M.M. 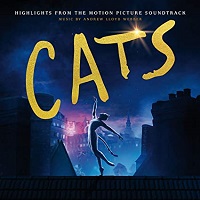 Film Soundtrack, 2020 (Republic) No stars; not recommended. Tom Hooper’s film adaptation of Cats is a true movie musical disaster, the director providing a master class in how to make every wrong artistic decision from the word “go.” As he did with his film version of Les Mis, Hooper once again required his cast, packed with misused talent, to sing live on set, so as to make the performances seem more “authentic” and less “fantastical.” Did no one tell him this was Cats? Part of what made the stage musical a worldwide phenomenon was its ability to take audiences away from reality; not since Attenborough’s A Chorus Line has a director so misunderstood the assignment. Even without watching the CGI hellscape that Hooper created on screen, one can understand why the film is so critically maligned just from listening to this soundtrack album. Every song is sung with trepidation, as if the cast is never sure what their starting note is or if they’ll even have the breath support to get through it. Performers such as Rebel Wilson (“The Old Gumbie Cat”), Laurie Davidson (“Mr. Mistoffelees”), and Sir Ian McKellen (“Gus: The Theatre Cat”) play with the rhythms and note values of their songs so much that they’re practically unidentifiable. The enlarged orchestrations are fussier and somehow sound more dated than the 80’s originals. A new song for the movie, “Beautiful Ghosts,” was written by Webber and Taylor Swift (who also makes a brief appearance singing “Macavity”) and is sung by a clearly embarrassed Francesca Hayward as Victoria; Swift’s lyrics are filled with empty poetry, and Webber’s melody evaporates into the air. On the credit side, Jason Derulo has fun as Rum Tum Tugger, and Jennifer Hudson delivers a solid if not exceptional “Memory.” But with iconic renditions by Elaine Paige and Betty Buckley already preserved, a solid “Memory” isn’t enough to make this soundtrack even tolerable. Better it be taken to the pound. — Matt Koplik