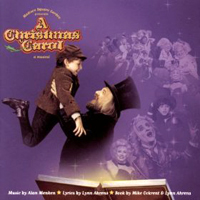 (3 / 5) The Alan Menken-Lynn Ahrens musical version of A Christmas Carol lit up Madison Square Garden for 10 seasons, and though the production’s spectacle played a vital role in its success, this recording documents the fact that an enjoyable score may also have had something to do with it. The adaptation is very straightforward; Menken and Ahrens’ took few liberties with Charles Dickens’ classic story. There are the requisite numbers for Scrooge’s feelings about Christmas as compared with those of his neighbors, his meetings with the ghosts of Christmases past, present, and future, and his eventual change of heart. The score is unremarkable, but that’s OK; songs like “The Lights of Long Ago” and “Christmas Together” are pleasant enough, “Mr. Fezziwig’s Annual Christmas Ball” is an attractive toe-tapper, and “A Place Called Home” is a charming, tuneful duet for the young-adult Scrooge and his lady love. Walter Charles is nothing short of ideal as Scrooge, acting and singing with all the necessary crotchety conviction. He leads a cast that includes such Broadway names as Christopher Sieber, Bill Nolte, Robert Westenberg, Ken Jennings, and Emily Skinner. This recording makes for an enjoyable, if not quite essential, listen during the holidays or at any other time of the year. — Matthew Murray 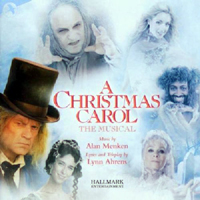 (3 / 5) Television adaptations of musicals are frequently mixed bags, given the perceived need for stars whom viewers will instantly recognize but who may or may not be well suited to their roles. However, many of the casting choices made for the 2004 Hallmark Entertainment version of the Menken-Ahrens A Christmas Carol were as savvy as they were starry, and this recording captures the best of their work. Jane Krakowski’s focused, empathetic performance as the Ghost of Christmas Past makes her big solo, “The Lights of Long Ago,” a major highlight. Jason Alexander is a showily threatening Marley. Jesse L. Martin is obviously having a ball as the Ghost of Christmas Present, and his “Abundance and Charity” is abundant with joy. Edward Gower and Jacob Moriarty sound just right as Bob Cratchit and Tiny Tim, respectively. Stage favorites Brian Bedford, Claire Moore, Linzi Hately, and Ruthie Henshall score in their smaller roles, the last particularly so as Scrooge’s Mother, delivering a lovely and poignant “God Bless Us Everyone.” On the recording, Scrooge is a somewhat diminished presence, so you don’t hear a ton of Kelsey Grammer, but what’s here is loaded with well-calculated grump if not all the gusto one wants from the role. A lush, full orchestra plays Michael Starobin’s lively orchestrations under the baton of Michael Kosarin. — M.M.