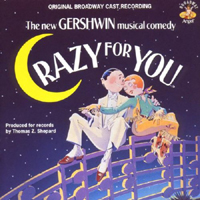 (2 / 5) This is a faux revival cloned from the DNA of a vintage musical, with a score drawn from the Gershwin songbook. Ken Ludwig’s book for Crazy for You is sort of based on the 1930 Gershwin hit Girl Crazy, transferring a standard, let’s-put-on-a-show plot to the Wild West. It’s hard to get very excited about the disc, which is really only a collection of Gershwin standards with a few rarities tossed in, but William D. Brohn’s orchestrations have real zing, and the cast is fun. As a New York millionaire who dreams of Broadway stardom and ends up putting on a show in Deadrock, Nevada, Harry Groener is a model of period style, tossing off “I Can’t Be Bothered Now” and “Nice Work If You Can Get It” with delightful ease. Jodi Benson plays his feisty cowgirl love interest with intensity, and her heartfelt vibrato is put to good use in “Someone to Watch Over Me” and “But Not for Me.” There are amusing contributions from Bruce Adler as a Yiddish-accented producer and Michele Pawk as Greener’s overbearing fiancée. The show’s heart is in its production numbers, such as “Slap That Bass” and “I Got Rhythm,” during which Brohn’s vivacious arrangements build to a state of ecstasy. It’s always more fun to hear a new score in a new show but, of its kind, Crazy for You is about as good as it gets. — David Barbour