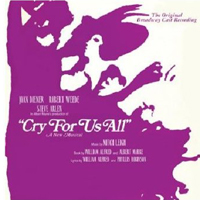 (4 / 5) This was composer Mitch Leigh’s follow-up to Man of La Mancha, and it was a long way from Spain to Brooklyn. The show was in trouble out of town — there was a temporary title change to Who to Love? — and it lasted only nine performances on Broadway. However, the score, with lyrics by William Alfred and Phyllis Robinson, often lives up to what this musical was trying to be: a semi-operatic version of Hogan’s Goat, William Alfred’s Pulitzer Prize-winning play about love and betrayal in the world of 1890s Brooklyn politics. Although the source material might have been better served by a completely sung-through approach, many of the songs are effective, and the performers handle them well. Joan Diener does a beautiful job with “Verandah Waltz,” “How Are Ya Since?” and “Who to Love?” There is strong legit singing from Steve Arlen in “The End of My Race” and Robert Weede in “The Mayor’s Chair.” Tommy Rall and Helen Gallagher do their best with some mediocre material, and the three urchins who narrate the story are entertaining in “The Broken Heart or the Wages of Sin” and “The Cruelty Man.” A few important songs are missing from this album, and others are heard in abridged form. The recording is available on CD as a rare, high-priced import.  — Jeffrey Dunn