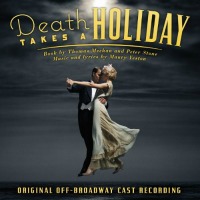 (2 / 5) On paper, Death Takes a Holiday probably looked like a wonderful idea for a musical. Composer-lyricist Maury Yeston has done some very admirable work, and audiences have long been intrigued with the story told here — based on a play by Alberto Casella that has received several adaptations, most famously as a 1934 film that starred Fredric March. So what went wrong? After the success of Titanic, Yeston and librettist Peter Stone chose to create an intimate musical inspired by Casella’s tale of a weekend during which Death puts aside his scythe and falls for a mortal girl. (Thomas Meehan joined the project after Stone’s death.) As it turned out, the plot was the first stumbling block for the adapters; the list of successful fantasy musicals is a short one, and the concept here is a whopper to swallow. Still, a strong opening number can get an audience to accept darn near anything — but Yeston disappoints with “In the Middle of Your Life/Nothing Happened.” Instead of being made to understand what it is about Grazia (Jill Paice) that causes Death (Kevin Earley) to stay his hand when she’s thrown from a car, we’re wincing at the bare exposition of the  lyrics: “What is that darkness I see ahead?” “We’re going into a spin!” Also wince-inducing is the line, “Nothing can go wrong for her.” (Did they really sing that? Yup.) Nor do we buy it when Death, impersonating a Russian prince,  tells Grazia’s father (Michael Siberry) of his desire for a vacation. Earley, who took over the role during preview performances when Julian Ovenden developed vocal problems, has a terrific voice, but its timbre isn’t well suited to the the Grim Reaper’s darker musical moments. He’s more effective in the lighter “Alive!” discovering the joys of breakfast, and in the romantic numbers with Paice, a solid Grazia. Oddly, the score’s best songs center on an unseen character: Grazia’s dead brother, Roberto. Major Fenton (Matt Cavenaugh) sees something in Prince Sirki’s eyes that eerily remind him of “Roberto’s Eyes” when his friend was shot down; and Rebecca Luker, as the mother, tells Sirki what death does to a family in the devastating “Losing Roberto.” The former conveys terror far better than characters intoning “Death is in the house!” and the latter lets Sirki truly know the pain he inflicts with each fatality, effectively leading to Earley’s heartfelt big number, “I Thought That I Could Live.” Would that the rest of the score matched the quality of these songs. Yeston’s melodies are lovely, with a nice Continental air (aside from a shimmy designed to get the cast dancing), but it’s hard to get past the often clunky lyrics. — Laura Frankos