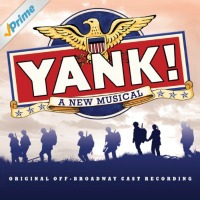 (4 / 5) Musical theater fans look back with affection at the Off-Broadway shows of the early- to mid-sixties — small, unique productions whose distinctive scores guaranteed them long life on record, if not on the boards. (The Fantasticks, of course, is a major exception in the length-of-run tally.) Today, there are still examples of terrific, innovative musicals getting their start Off-Broadway or Off-Off-Broadway, and thankfully, many of them are being recorded. In the case of Yank!, a Kickstarter campaign helped raise funds to preserve the performances of nearly the entire company of the show’s 2010 York Theatre production. (Two of the cast members had scheduling conflicts.) Yank! is the creation of brothers David Zellnick (book and lyrics) and Joseph Zellnick (music), a wholly original work inspired by the precarious situation of gays and lesbians who had to remain closeted while serving in the armed forces during World War II. It centers on Stu (the amazing Bobby Steggart) and his love for Mitch (Ivan Hernandez), yet somehow the Zellnicks convey that their story reflects that of the thousands of others like them who served with honor. The storytelling is tight and focused, making good use of Stu’s wartime journal, discovered at the start of the show by a young man in the present day (also played by Steggart). This device offers a link between our time and the past while also allowing us to hear Stu’s private thoughts. The clever title number introduces the squad — the expected melting pot of ethnicities — and lets us see and hear Stu’s reaction to each of his comrades. The music effectively recreates the 1940s sound, especially in the diegetic numbers presented as songs heard on the radio; the fact that the legendary Jonathan Tunick was enlisted to rework the show’s original orchestrations for this recording doesn’t hurt. Nancy Anderson, the sole woman in the cast, is a musical chameleon. She plays four different vocalists, each with her own nuanced style, as well as Louise, a blunt lesbian secretary interviewed by Stu for Yank magazine. Jeffry Denman shines in the standout “Click,” reassuring Stu that “there are more of us than you imagined” and demonstrating (in dance) the signals and codes of gay social relations. The guys in Charlie Company are red-blooded American males; they indulge in lots of bullying and pranks, and they’re constantly thinking and talking about women, as in an ode to pin-up girls, “Betty.” But, in the end, the story is Stu’s, and Steggart owns the role. The quaver in his voice reveals Stu’s terror during basic training, his need to fit in, and his concerns about his sexuality. His longing for Mitch is natural and convincing; “Just True,” in which the two men dream of a future together, may well reduce the listener to tears. The album concludes movingly with Steggart, again as the young man who found the journal, pondering Stu’s fate, followed by a brief reprise of the key ballad, “Rememb’ring You.” — Laura Frankos