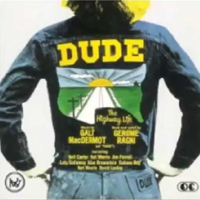 (3 / 5) Here’s one of Broadway’s legendary disasters, described by Otis Guernsey, Jr. in the Burns Mantle Yearbook as “an ardent questing for eternal verities of heaven and earth, life and death, youth and maturity, in the form of an unruly rock musical.” Perhaps, but it plays well on this recording, which was made some months after the show’s 16-performance run ended. You’ll be surprised that Dude was such a terrible flop when you hear the overture, which starts out majestically. The score is more bluegrass than rock, but Galt MacDermot’s music is always tuneful. Some show songs make you tap your feet, while more forceful ones make you briskly nod your head in tempo; Leata Galloway’s rendition of “I Am What I Am” is in the latter category, and so is Nell Carter’s “So Long, Dude.” The melody of the title song is quite good, although Gerome Ragni’s lyrics for it aren’t so special. Ragni is also responsible for Musical Theater’s Most Unlikely Song: “I’m Small,” in which a guy confesses to being terribly unwell-hung. The CD  includes 10 cuts from a separate album of songs from the show that was recorded by the androgynous-sounding Salome Bey. All of these songs display MacDermot’s great gift for melody. We must mourn the fact that, throughout his career, he didn’t work with better collaborators and pick his projects more carefully. Whatever was wrong with Dude, MacDermot’s music wasn’t the problem. — Peter Filichia