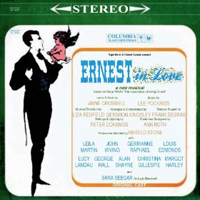 (3 / 5) Following the success of My Fair Lady, it seemed that witty and teddibly literate entertainment was what the theatergoing public craved, so lots of songwriters began plowing through all things British for anything that would allow a similar tuner to be adapted. In light of that mad scramble, it’s not surprising that Oscar Wilde’s The Importance of Being Earnest attracted lyricist-librettist Anne Croswell and composer Lee Pockriss. This is the romp in which the incomparable Victorian playwright twitted a couple of twits who woo two young damsels, one of whom has an inordinately proper mother. Luckily, Croswell and Pockriss brought sufficient elan to bear in a score’s that’s somewhat derivative but nevertheless has charm and lilt. While Croswell’s lyrics do not necessarily approach Wilde’s genius with an epigram, the show is by no means a travesty. Although it produced no chart climbers, it does boast “A Wicked Man,” which got some attention. “How Do You Find the Words?” is also a bit of all right, even if it sounds rather like something salvaged from the Lerner and Loewe discard bin. The speak-singing leading man that Rex Harrison validated in My Fair Lady is represented here by John Irving (not the novelist). Far superior vocalism comes from the pursued soubrettes, Gwendolyn (Leila Martin) and Cecily (Gerrianne Raphael). Sarah Seegar as Lady Bracknell delivers Croswell’s best rhyme — “satchel or” with “bachelor” — upon learning that, as a baby, her daughter’s suitor was found in a handbag. Gershon Kingsley provided the lively arrangements. — David Finkle