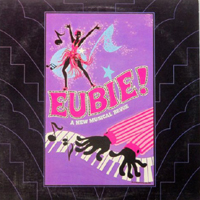 (2 / 5) The resurrection of Eubie Blake’s music in the 1970s was a joyous affirmation of the fact that even if genuine talent fades for a while, often it makes a comeback. Blake’s career had peaked in 1921 with the all-black Broadway hit Shuffle Along, but he was still around more than a half-century later — a charming nonagenarian making appearances on talk shows, telling great stories, and playing a mean piano. Blake also had some fine songs to his credit. While “I’m Just Wild About Harry” (lyrics by Noble Sissle) and “Memories of You” (lyrics by Andy Razaf) are the only two that most people remember, many others are worth reprising. In 1978, a few months after the Fats Waller tribute Ain’t Misbehavin’ opened, it was Blake’s turn. Forty years’ worth of his songs were performed by an energetic, all-black group of singer-dancers in a revue that just had to be titled with the composer’s euphonious, unforgettable first name — plus an exclamation point! The company included Gregory and Maurice Hines. It would be nice to report that the cast album is a winner,  but it’s not a complete success. Part of the problem is that the material is inconsistent in quality. Blake was not Fats Waller, and while his melodies go from rags to blues to Tin Pan Alley, they aren’t always top-drawer. The arrangements are overblown, and the recorded sound is often unpleasant, as was the sound amplification in the theater. Many of the performers seem to have been directed to give subtlety a holiday and try to stop the show at every opportunity. “My Handy Man Ain’t Handy No More,” with its cheerfully dirty lyrics by Razaf, is a case in point. A song like this shouldn’t be blasted out, as Alaina Reed does here; double entendres are usually funnier when they’re not hammered home. Blake’s songs require more care than they received in this revue.  — Richard Barrios