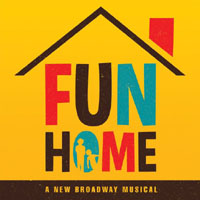 (5 / 5) Alison Bechdel’s Fun Home may seem like strange fodder for a Broadway musical. A memoir in the form of a graphic novel, it chronicles Bechdel’s coming out as a lesbian during her freshman year of college — shortly before her father, whom she discovers is a closeted homosexual, commits suicide. But creators Jeanine Tesori, Broadway’s premier female composer, and playwright Lisa Kron, here functioning as both librettist and lyricist, created a dazzling memory musical with a score that is unassuming, yet powerful. The show is narrated by Alison as an adult, played by a grounded Beth Malone; she is struggling to write the memoir as she sorts through her memories, some more vivid than she would like. Flowing in and out of various decades, the songs are variously timely (the faux-’70s-pop “Raincoat of Love”) and timeless (“Telephone Wire,” Bechdel’s recollection of her last moments with her father), all of them beautifully supported by John Clancy’s subtle, elegant orchestrations. Fun Home is a powerful piece that’s given a full, beautiful treatment on the cast recording, thanks to a generous amount of included dialogue. As the doomed father, Bruce, Tony Award winner Michael Cerveris is terrifying and pitiful. Judy Kuhn, as his long suffering wife, Helen, is beautifully restrained in “Days and Days,” a reminiscence of her misused life. Emily Skeggs is adorably awkward as Alison in her college years; but youngster Sydney Lucas, who plays Allison as a child, is the show’s secret weapon. Shedding the stereotype that shadows most child actors, Lucas is mature and strong and in complete control of her performance. Her rendition of “Ring of Keys,” in which a young Alison observes a masculine delivery woman in a diner and experiences her first moment of self-recognition in another person, is the ultimate highlight of the show. That song, like Fun Home as a whole, is destined to become a classic. — Matt Koplik