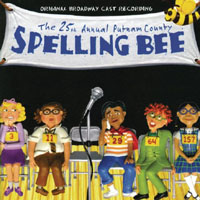 (4 / 5) This show, about a regional spelling bee with prepubescent contestants, marked the Tony Award winning composer/lyricist William Finn’s return to Broadway after a long absence. For that reason alone, The 25th Annual Putnam County Spelling Bee is worth celebrating. It also happens to be an inventive, warm, and joyful musical. Finn shines best as a writer when his characters are up to his intelligence, and here we have six abnormally smart, strange, prematurely eloquent pre-teens who let their insecurities, jealousies and hormones rage during the competition. It seems evident that Finn enjoyed himself while writing Spelling Bee, as this marks his most playful work since In Trousers. The cast album isn’t given the highest possible rating here only because the score is woven so intricately into Rachel Sheinkin’s excellent libretto (arguably one of the best of its era) that a good deal of it may not impress listeners out of context as much as it does in the theater. One exception is “The I Love You Song,” a beautiful piece in which speller Olive Ostrovksy (played beautifully by Celia Keenan-Bolger) imagines the support and devotion of her parents, neither of whom are present at the bee. The entire cast is definitive, including Deborah S. Craig, Jesse Tyler Ferguson, Dan Fogler, Jose Llana, and Sarah Saltzberg as the other young competitors. In addition to being excellent singers, they are charming, intelligent actors so in tune with their roles that it’s easy to forget they’re all a good decade or two older than the characters. — Matt Koplik