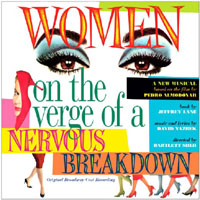 (3 / 5) With its all-star cast and creative team, and a hilarious movie by Pedro Almodóvar as its source material, Women on the Verge of a Nervous Breakdown seemed poised to dominate the 2010-2011 Broadway season. Sadly, due to overly busy staging and a book inconsistent in tone, the show was a disappointment that ran for less than two months. But this crisp recording makes clear that it had a strong score overall, incredibly well sung by said all-star cast. Composer/lyricist David Yazbek (The Full Monty, Dirty Rotten Scoundrels) does some of his best work here; his melodies capture the essence of a vivacious Barcelona, and they’re enhanced by Simon Hale’s flavorful orchestrations. The lyrics are by turns witty and fun (“On the Verge”) or achingly lovely (“Shoes from Heaven”). Even with such passion and talent involved, however, the recording gives some indication of why the show didn’t work. Sherie Rene Scott is miscast as Pepa, an actress jilted by her lover via a message left on an answering machine. Although she’s in great voice, she doesn’t quite capture the proper spirit of zaniness, and she does better with ballads like “Mother’s Day” than with zesty pieces like “Lovesick.” In addition, both Danny Burstein and Brian Stokes Mitchell as (respectively) a taxi driver/narrator and Pepa’s exiting lover, Ivan, are criminally underused, with Mitchell given the weakest material in the score. Still, the highs outweigh the lows. As Pepa’s best friend, Candela, Laura Benanti shows her comedic brilliance in “Model Behavior.” It’s a tour de force number that chronicles the character’s constantly dramatic life via a series of voice messages, and Benanti handles Yazbek’s tongue twisting lyrics with ease. Patti LuPone is excellent as Lucia, Ivan’s unstable ex wife, and Yazbek gives her his best ballad to date with “Invisible,” Lucia’s plea for her sanity in a world that won’t let her move on. Though imperfect, Women on the Verge is an impressive work with a score that allows some of the modern musical theater’s finest performers several chances to shine. — Matt Koplik