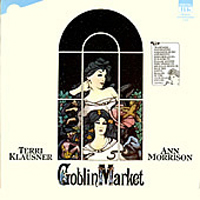 (2 / 5) Goblin Market was a snob hit of the 1985-86 Off-Broadway season. Based on a fairy tale in verse by the pre-Raphaelite Christina G. Rossetti, this two-character “music theater piece” was the public’s introduction to composer Polly Pen. With a libretto by Pen and Peggy Harmon, Goblin Market premiered at the Vineyard Theatre, which had commissioned it. That staging, directed by André Ernotte, subsequently transferred to Circle in the Square. Rossetti’s lengthy poem concerns two young sisters, the bold Laura and the fainthearted Lizzie, who are tempted by specters proffering fruits that are luscious-looking but dangerous. Written in 1862, the poem is an angst-driven fantasy of early Victorian sexual wish fulfillment; Pen and Harmon transformed it into a story of grown-up siblings who visit the nursery of their childhood to ponder their developmental years from an adult perspective. The score, which reflects a variety of influences from baroque vocal literature to 19th-century parlor songs and 20th-century theater music, often matches the morbidity of Rossetti’s verse. Pen has a knack for creating tonal configurations and rhythmic patterns that seem anodyne until, repeated as themes, they reveal an eccentric complexity and burrow into the listener’s consciousness. On the recording, Terri Klausner as Laura and Ann Morrison as Lizzie handle the arias with vivid expressiveness and musical accuracy. James McElwaine’s orchestrations, although performed by a combo of only four, lend a cello-rich heft to the delicate melodies. In the years since Goblin Market, Pen has been showered with awards and grants. Her well-deserved success illustrates how effectively the nonprofit resident theater system and charitable funding for the arts have combined, despite attacks from the political right, to nurture a branch of American musical theater that has no connection to mainstream tastes.  — Charles Wright