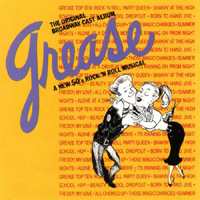 (4 / 5) Those who know Grease only from its inexplicably popular, sophomoric film version or the pumped-up, wrongheaded 1994 Broadway revisal will be surprised the first time they hear this album. As first seen Off-Broadway and then on Broadway after a run in Chicago, the show was an affectionate little musical about the teenage lifestyle of the late 1950s — when rock and roll was aborning, the cool boys sported heavily gelled hair and motorcycle jackets, and their girls favored beehive hairdos and pedal pushers. The original Broadway production was the long-run champ for a time, racking up 3,338 performances before it closed in 1980. With book, music, and lyrics by Jim Jacobs and Warren Casey, Grease skillfully walks the line between parody and hommage. The melodies, rhythms, harmonies, and arrangements of the songs are clever knockoffs of popular ’50s hits, very catchy and buoyed by some clever lyrics. (Example, from “Freddy, My Love”: “I treasure every giftie / The ring was really nifty / You said it cost you fifty / So you’re thrifty / I don’t mind.”) Other highlights include “Summer Nights,” which amusingly presents a boy’s and a girl’s different descriptions of their summer romance; the infectious “Magic Changes,” sung by a kid who’s thrown himself wholeheartedly into guitar lessons; “It’s Raining on Prom Night,” an oddly touching, funny lament over a lost high-school love (sample lyric: “I don’t even have my corsage, oh gee / It fell down a sewer with my sister’s I.D.”); and “We Go Together,” a bouncy anthem of teenage unity. The score does contain one serious number, and it’s a good one: “There Are Worse Things I Could Do,” sung by Rizzo, whose outward toughness masks her vulnerability. Adrienne Barbeau gives the song a moving, well sung performance. Barry Bostwick is terrific as lead greaser Danny, and Carole Demas sounds just right as Danny’s sweet girlfriend, Sandy. Among the other standouts in the cast are Katie Hanley, Walter Bobbie, and Kathi Moss. — Michael Portantiere 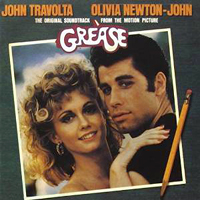 (1 / 5) The first cut on this album, a new title song (there was none in the stage show), cues you into the silly, anachronistic style of the film version of Grease. It’s a disco number, of all things, written by Barry Gibb of the Bee Gees and sung by Frankie Valli. (Although Grease is set in the late 1950s, director Randal Kleiser and colleagues apparently thought it necessary to add a disco song to the score, simply because that type of music was so popular when the film was made.) Other additions to the song stack aren’t as objectionable. Louis St. Louis wrote “Sandy,” a new lost-love song for Danny (John Travolta) that’s okay but not as much fun as “Alone at a Drive-In Movie,” the Jacobs-Casey song it replaced. John Farrar contributed “Hopelessly Devoted to You,” a pretty ballad for Sandy (Olivia Newton-John); and “You’re the One That I Want,” a Sandy-Danny duet that’s catchy but also sounds out of period despite the “oo-oo-oos” in the chorus. In Rizzo’s songs, Stockard Channing resorts to vocal mugging and over-inflection; it seems she has a fine singing voice, but doesn’t trust it. On the other hand, a plus for both the movie and the album is Frankie Avalon’s performance of “Beauty School Dropout.” Note that “Greased Lightnin'” is led here by Danny rather than Kenickie, presumably to give Travolta another showcase song. Also note that some numbers in the show score, such as “Those Magic Changes” and “It’s Raining on Prom Night,” are performed on the soundtrack album by various artists but aren’t actually included in the film, or are heard only as background music. — M.P. 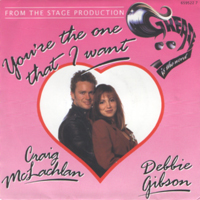 (2 / 5) Producer Robert Stigwood interpolated the songs that were written expressly for the Grease film into his London staging of the musical. The anachronistic title number, sung here by the full company, still rankles, but other, more innocuous songs from the movie are well performed. Deborah Gibson is perfect for the role of Sandy, and Craig McLachlan is right-on as Danny. As Rizzo, Sally Ann Triplett overplays “Look at Me, I’m Sandra Dee” (and mispronounces Troy Donahue’s last name) but does a fine job with “There Are Worse Things I Could Do.” Charlotte Avery offers a regrettable Marilyn Monroe impersonation in “Freddy, My Love.” Of the others, Shane Richie’s Kenickie and John Combe’s Doody are especially commendable. — M.P. 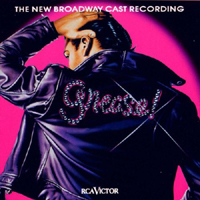 (2 / 5) The nonsensical addition of an exclamation point to the show’s title is emblematic of how overblown this production of Grease! was. The vocals of Sam Harris and Billy Porter in (respectively) “Those Magic Changes” and “Beauty School Dropout” are the clearest examples of the show’s exaggerations; both men have amazing voices, but they perform these numbers as super-aggressive power ballads rather than the charming songs they used to be. As Rizzo, Rosie O’Donnell sounds good in “Look at Me, I’m Sandra Dee” but not good in “There Are Worse Things I Could Do.” Ricky Paull [sic} Goldin and Susan Wood are fairly nondescript as Danny and Sandy, but on the credit side, Megan Mullaly is a hoot in Marty’s “Freddy, My Love.” Producers Barry and Fran Weissler couldn’t get the rights to the new songs that were written for the movie of Grease, so the track list of this recording is similar to that of the original Broadway album — except that the old favorite “Since I Don’t Have You” by Joseph Rock, James Beaumont, and the Skyliners is added for Sandy, and “All Choked Up” is cut. Let the record show that, in a strange and deplorably misleading move, this was billed as “the Tommy Tune production of Grease!” even though it was directed and choreographed by Tune protégé Jeff Calhoun. — M.P. 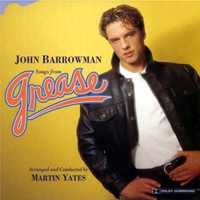 (2 / 5) This recording would be superfluous if not for the participation of John Barrowman, a Scottish-born singing actor who became a star of the London musical stage as a young man but who, as of this writing, has had only two brief stints on Broadway (in Putting It Together and Sunset Boulevard). Barrowman brings his strong, clear, sexy tenor to Danny’s songs and to the ridiculous “Grease” disco number that was written for the movie. The other three song additions to the flick are also included here. As Sandy, Shona Lindsay makes unpleasant sounds when belting at the top of her range. There’s nothing distinctive about the rest of the cast members, some of whom are less successful than others at masking their Brit accents. — M.P. 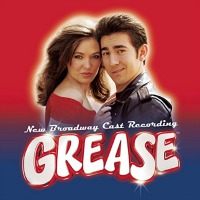 (3 / 5)  If one were to make a list of  cast recordings that are far more enjoyable in their own right than the shows that yielded them, this one would place pretty high on it. The latest Broadway production to bear the title Grease — this time without the silly exclamation point that was used for the 1994 revisal — had a huge red flag attached to it from the moment it was announced that the leading roles of Danny Zuko and Sandy Dumbrowski would be cast via a TV “reality” series called Grease: You’re the One That I Want! (There’s that exclamation point!) What ended up on stage was not good in terms of Kathleen Marshall’s way-off-base direction or the design elements. For better or (some would say) worse, the song stack included the now almost obligatory numbers that were written for the monster hit film of Grease: the title song, “Hopelessly Devoted to You,” “Sandy,” and yes, “You’re the One That I Want.” Of the two leads chosen by way of that idiotic TV show, only one — Laura Osnes as Sandy — proved to be ideal in every way. Count her among the cast album’s biggest assets. And though Max Crumm was/is not right for Danny in terms of physical type or personality, his vocal performance is thoroughly satisfying. Jenny Powers sounds a little square as Rizzo, but Matthew Saldivar as Kenickie does a great, sexy job with “Greased Lightnin’.”  (Note that in this version, for some reason, the chicks scream rather than cream.) Ryan Patrick Binder is appealing in Doody’s “Magic Changes,” and the rest of the cast includes such talents as Stephen R. Buntrock as Teen Angel and Lindsay Mendez in her Broadway debut as Jan. The arrangements and orchestrations (by Christopher Jahnke) are not overblown as on the 1994 recording, and the sound mix is excellent. — M.P. 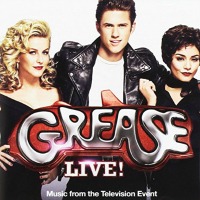 (3 / 5) A new wave of live TV presentations of Broadway musicals began in 2013 with a mostly terrible production of The Sound Of Music, since followed by several others that were not much better. Given that low bar of achievement, the best of the lot by a wide margin was Grease: Live, which aired on January 31, 2016. On the one hand, what millions of viewers saw that night was hugely different from the musical as originally conceived, written, and presented in the early 1970s; a few songs were added that had never been heard in any previous version of the show (or the movie), and the script was heavily revised by Jonathan Tolins and Robert Cary. But Grease: Live was very well done in terms of its production elements and its direction by Thomas Kail (of Broadway’s Hamilton and In The Heights) and Alex Rudzinski. A generally strong cast is headed by Aaron Tveit as Danny and Julianne Hough as Sandy (here given a new surname, “Young”), with Carlos PenaVega as Kenickie, Jordan Fisher as Doody, and Carly Rae Jepsen as Frenchy (handed a new song, “All I Need is an Angel,” by the Broadway team of Tom Kitt and Brian Yorkey). The one weak link is Vanessa Hudgens as Rizzo; her voice has a thin, bright timbre that’s all wrong for the role, and her interpretation of the songs mostly consists of aping Stockard Channing’s renditions in the film. There are also appearances by everyone from Jessie J singing the title song to Boyz II Men as the “Teen Angels” to Joe Jonas and DNCE as “Johnny Casino and the Gamblers.” Both the video and audio versions of this Grease are enjoyable if you’re willing to accept something that only intermittently resembles the property that first bore the title.  — M.P.