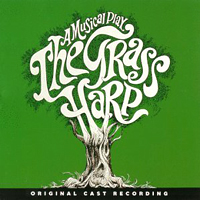 (5 / 5) Even if it didn’t star Barbara Cook, in resplendent voice in her last Broadway musical, this would be the most glorious cast album that you’ve never heard. A messy book (from Truman Capote’s novella) and under-financing shuttered the poorly received show after five performances in 1971. But this recording, made some months later with almost the entire original cast (a chorus of adults subbed for a chorus of children), preserves the lustrous music of Claibe Richardson and the sharp lyrics of Kenward Elmslie that combine to conjure up the rustic South in the early part of the 20th century. Cook plays Dollyheart, who tends the home of her breadwinner sister Verena (Ruth Ford), who has fallen in love with Dr. Morris Ritz (Max Showalter). The doc wants to market the dropsy cure that Dollyheart’s been making in the backyard with nephew Collin (Russ Thacker) and maid Catherine (Carol Brice). But Dollyheart won’t give up her secret formula, and this causes Verena to lash out at her. So Dollyheart takes Collin, Catherine, and the cure with her on what becomes a modest adventure with a faith healer (Karen Morrow). It’s all set to a fine score with orchestrations split among old master Robert Russell Bennett, new master Jonathan Tunick, and jazz specialist J. Billy Ver Planck. Cook has two beautiful ballads, “Chain of Love” and “Reach Out.” Brice gets one that’s a bolt of lightning, “If There’s Love Enough,” and another that’s top-notch comedy, “Marry With Me.” Thacker delivers the raucous “Floozies” and the more tender “This One Day,” while Morrow gets the 12-minute masterpiece “The Babylove Miracle Show,” in which the faith healer encourages her listeners to “hang a little moolah on the wash line.” It might well seduce you into opening your wallet; you’ll be glad you did so in order to buy the cast album of The Grass Harp.  — Peter Filichia