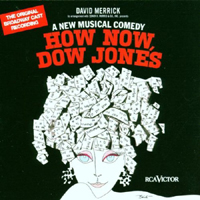 (3 / 5) The story of a misfit who, rather than committing suicide, decides to try his hand at selling stock, this show made audiences laugh for one season and is hardly remembered today. But the cast album reveals what a creative collaboration the prolific film composer Elmer Bernstein had with the devilishly clever lyricist Carolyn Leigh. How Now, DowJones begins with a clever explanation of the workings of Wall Street (“ABC”), then deals with various characters’ romantic problems. The talented belter Marlyn Mason and the wonderfully zany Brenda Vaccaro raise their voices in “They Don’t Make ‘Em Like That Anymore.” After spending the night with the suicidal Charley (Tony Roberts), Mason’s character sings the excellent ballad “Walk Away.” Charley decides not to jump out of a window when some Wall Streeters tell him that all he must do to succeed is “Gawk, Tousle and Shucks.” He goes off to sell stocks to widows, which leads to the show-stopping ensemble march “Step to the Rear.” Also among the score’s highlights are “Rich Is Better,” “Shakespeare Lied,” and “He’s Here.” — Jeffrey Dunn