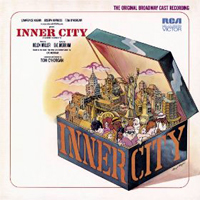 (4 / 5) Perhaps the source material was too obscure for audiences to really understand this show, which only ran on Broadway for 97 performances (and 24 previews). What poet Eve Merriam originally wrote was Inner City Mother Goose, a new take on nursery rhymes from an urban, sometimes violent perspective. So the familiar “Fee Fi Fo Fum” was followed by the less-expected “I smell the blood of violence to come,” while “Now I lay me down to sleep” was followed by “and I pray the double lock will keep.” Helen Miller set the poems to theatrical rock music. Most of them last a minute or less, but they’re memorable minutes. In “Hushabye Baby,” an unwed teenager sings about the child she’ll soon have, and it sounds like something that Brecht and Weill might have written had they been around in the early 1970s. Other highlights include “On This Rock,” a statement of urban pride; the jaunty “City Life”; and the pulsating “Law and Order,” which the TV series of the same title should have used as its theme song. “Deep in the Night” and “It’s My Belief” are solid anthems that helped win Linda Hopkins a Tony Award as Best Featured Actress. Then there’s “The Hooker,” in which a prostitute sings, “If they want to hear a story, then I give out with a story…I need ten dollars for grandma, who is coughing and spitting up blood. But whaddaya say we cut the crap?” The same socko melody is used for both “The Pusher” and “The Pickpocket,” but that last one didn’t make the album. That’s all right, we should be very grateful that this short-running show yielded a cast recording at all. — Peter Filichia