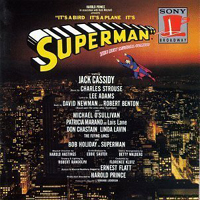 (3 / 5) This show seemed to have so much going for it, with a central character beloved by millions through the comic books and a popular television series. Composer Charles Strouse and lyricist Lee Adams asked David Newman and Robert Benton to write a book for a proposed musical with Superman as its central character; Harold Prince agreed to produce and direct the show. It’s a Bird . .. It’s a Plane . .. It’s Superman opened to four good reviews, including a rave from New York Times critic Stanley Kauffman. But, for some reason, audiences did not flock to the show, and it ran only 129 performances. That was surely not the fault of the songs; this is a good-natured, humorous score, as colorful as the comic book characters it portrays. Reporter Jimmy Olsen is missing from the action, and Perry White is a small, non-singing role, but many new characters were created for the musical. Gossip columnist Max Mencken was played by Jack Cassidy to a fare-thee-well, and the role of his secretary marked a major career step for Linda Lavin. These two get the best of the songs: Cassidy’s suave, amusing seduction of Lois Lane, “The Woman for the Man,” is a showstopper, as is Lavin’s counter-attempt to seduce Clark Kent with “You’ve Got Possibilities.” This number and her “love song” to Max, “Ooh, Do You Love You,” allow Lavin to unleash her powerful belt voice, heard infrequently on Broadway. Cassidy has two other terrific numbers, “So Long, Big Guy” and his vaudeville-style duet with the villainous Dr. Sedgwick (Michael O’Sullivan), “You’ve Got What I Need.” The songs for Superman/Clark Kent are mostly tongue-in-cheek; Bob Holliday, who was a good physical match for the role, displays a first-class baritone and delivers “Doing Good” and “The Strongest Man in the World” impressively. The character of Lois Lane, played by Patricia Marand, is treated pretty much like a traditional musical comedy heroine; she pines for you-know-who in “It’s Superman,” a lament that’s both wistful and amusing. (In Act II, this song becomes a super ensemble number.) Marand also has a nifty duet with Don Chastain as scientist Jim Morgan, titled “We Don’t Matter At All,” and after he becomes her love interest, she sings the plaintive “What I’ve Always Wanted.” As bonus tracks, the CD edition of the cast album offers demos of three deleted songs plus a version of “You’ve Got Possibilities” with notably different lyrics, all performed stylishly by Strouse and Adams. — Jeffrey Dunn