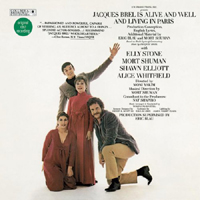 (3 / 5) This is the show to blame! The success of Jacques Brei Is Alive and Well and Living in Paris began the songwriter-revue revolution, but it would be a full decade before another good example of the genre showed up. (That show was Ain’t Misbehavin’ and it propelled a spate of glorified cabaret acts masquerading as musicals.) The Brel songs are performed with brio by a marvelous cast: Mort Shuman, who also adapted the French lyrics into English, co-stars with Shawn Elliot, Elly Stone, and Alice Whitfield. Jacques Brei introduced American audiences to a sophisticated romanticism blended with more than a soupçon of Gallic cynicism. After the initial run, a few regional productions, and a film version that featured Brel himself, this revue slid into semi-obscurity, although a reconstituted version of it was presented Off-Broadway in 2006. At any rate, Columbia thought enough of the original production to issue the cast album as a very fancy, boxed, two-record set. — Ken Bloom