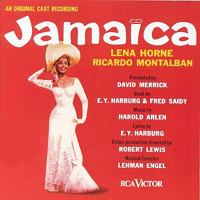 (2 / 5) Some Broadway musicals are timeless, while others spoke only to their era and audience and then were never heard from again. Jamaica is decidedly in the latter category. It was a hit for Lena Horne and the matchless team of Harold Arlen and E.Y “Yip” Harburg. Then, after a year-plus run, it vanished without a trace (other than this recording). Calypso was a ’50s phenomenon, and this score is full of it; in fact, Jamaica was originally written to star America’s calypso singer of choice, Harry Belafonte. When he proved unavailable, a rewrite gave movie star Horne a big-time Broadway debut. Her co-stars were notable as well: Interesting color-blind casting put Ricardo Montalban, a Mexican playing a West Indian, opposite Horne. Support was provided by Josephine Premice (husky-voiced and very entertaining), the personable Ossie Davis, and the veteran Adelaide Hall. The cast album is full of spirit and style, although the Jamaican patois sounds heavy-handed and phony coming out of Horne’s mouth. Arlen’s music is attractive but forgettable. Harburg failed to come up with a strong book (co-written with Fred Saidy and an uncredited Joseph Stein) and, in his lyrics, he mostly settles for a mix of faux-Caribbean attitude and obvious satire of Yankee consumerism and customs; not even the sultry “Coconut Sweet” is a truly worthy entry in the Arlen-Harburg canon of standards. While this recording cannot reproduce the show’s opulent designs and spicy Jack Cole choreography, it does give us a good idea of how Jamaica functioned: showcasing the dynamic Horne, moving swiftly, and providing very little of lasting value. — Richard Barrios