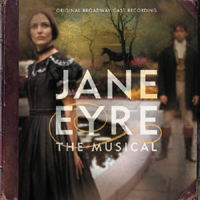 (4 / 5) Based on Charlotte Brontë’s classic novel of sturm und drang on the English moors, the musical Jane Eyre represented the last gasp of the pop-opera cycle on Broadway. It managed to hang on for 209 performances, but tastes had shifted toward more lighthearted entertainments. The presence of director-librettist-co-lyricist John Caird (of Les Misérables fame) emphasized further how times had changed. Oddly, perhaps because of its intimate, introspective nature, a show that seemed stiff and uninvolving onstage fairly overflows with feeling as heard on this superbly well produced recording. Composer-lyricist Paul Gordon has a knack for melodic lines that are romantic and neurotic at the same time, and the lyrics are exceptionally literate. As Jane and Rochester, Marla Schaffel and James Barbour are the whole show, delivering abundant vocal thrills in such arias as “Sweet Liberty” and “The Pledge.” The song “As Good As You,” in which Rochester ruefully recalls his rakish past, is a gem of character revelation; so is the slashing, tormented “Painting Her Portrait,” in which Jane struggles to accept living life as a spinster. Throughout, Larry Hochman’s orchestrations have a plangent emotional transparency. This is a fine record of a show that may well be heard from again. — David Barbour