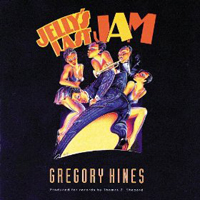 (4 / 5) With a score inventively cobbled together from Jelly Roll Morton’s musical catalogue, Jelly’s Last Jam tells the composer’s life story in a show that is as moving as it is entertaining. Luther Henderson (musical adaptation), Susan Birkenhead (new lyrics), and George C. Wolfe (director) used songs not originally written for the theater to propel the plot forward, and this recording proves the excellence of their efforts. The show benefited enormously from ideal casting. Gregory Hines received a well-deserved Tony Award for his star turn as Morton. His smooth vocals and crisp tapping quicken the pulse and gladden the soul in one highlight after another: “Doctor Jazz,” “That’s How You Jazz,” the hauntingly sung and acted “Creole Boy,” and others. Another Tony winner for this show, Tonya Pinkins as Anita, sings “Play the Music for Me” and “Last Chance Blues,” a tough duet with Hines. There’s also notable ensemble work by “The Hunnies”: Mamie Duncan-Gibbs, Stephanie Pope, and Allison Williams. The booklet accompanying the CD edition of the recording  includes a concise synopsis and all the lyrics. — Morgan Sills