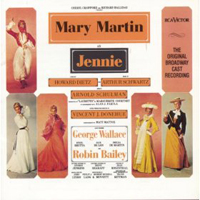 (3 / 5) A star vehicle for Mary Martin, Jennie is a prime example of how a musical with wonderful ingredients can fail to jell. Arnold Schulman’s book, a fictionalization of the life of Laurette Taylor with the character’s name changed to Jennie Malone, is insufferably dull, but the Arthur Schwartz-Howard Dietz score boasts many captivating numbers. Martin is featured in 10 of the 14 vocal tracks on the recording. She rips into “Waitin’ for the Evening Train,” a catchy vaudeville-style number with George Wallace, and caresses “I Still Look at You That Way.” She is almost as corny as Kansas in August in the exuberant “Born  Again” and in the inspirational “The Night May Be Dark,” the latter sung with Ethel Shutta as her mother. Martin also shines in “Over Here,” a duet with Robin Bailey. Finally, the star’s “Before I Kiss the World Goodbye” is exceptionally well performed and then reprised as her solo finale. Jack DeLon’s ringing tenor is heard in the catchy ensemble number “When You’re Far Away From New York Town,” and Shutta gives her all to the mediocre “For Better or Worse.” Also noteworthy are the sparkling orchestrations of Philip J. Lang and Robert Russell Bennett, and the dance arrangements of Trude Rittman: “Sauce Diable” is one of the most invigorating dance numbers ever captured on a Broadway cast album. — Jeffrey Dunn